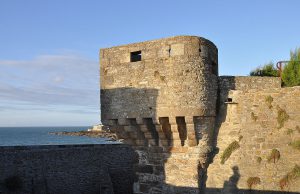 The city walls of Saint-Malo : the birth-place of Pierre de Clorivière (by Moonik, CC)

During the French Revolution, the life of Father De Cloriviere, a Jesuit, was disrupted by the suppression of the Society of Jesus. He was inspired to create a new form of religious life, totally immersed in the modern world and prefiguring the 20th century’s secular institutes. He founded both institutes: the Society of the Priests of the Heart of Jesus and a similar society for women.

“I conceived it would be the setting up of a sort of universal religious Society that would be open to any kind of people, of any age, country or condition, being capable of the evangelical perfection. They wouldn’t separate their members from the ordinary faithful people…” (letter to Joseph Limoëlan, April 6th 1810)

When the Company of Jesus was restored, Clorivière would be invited to restore it in France. He would not be involved in the Society any more and it would disappear with its last member in 1866… before being founded again by a priest of Paris, Daniel Fontaine, in 1918.

They remain in the Heart of Jesus being for them “a place of rest, an oratory, a school, a shelter and a center”. (Clorivière, spiritual retreat in 1771).

The members of the Society find the unity of their personal life in the sharing of Christ’s feelings. They radiate such a love like the first Christians who had “but one heart and one spirit” (Ac 2).

The Society caracterisses itself by an absence of visible signs. The members have no common life, no uniforms, no charities. The political context required it but thereby Clorivière was returning to the ideas of the first evangelists of the Primitive Church.

As soon as the political situation allowed it, Clorivière hastened to increase his approaches to the Pope and his circle, so that the young Society could be acknowledged as being useful to the good of the Church and the world. This acknowledgment has allowed the Society to be developed for the greatest glory of God.

The Institute in the World

The Letter of the Institute of the Heart of Jesus

The last Letter of the Institute!